How did the 16 days in May challenge go? Not to the discouragement of my readers, I admit defeat.

This really was a challenge, and I am not that happy with how it went. Why? Life got in the way. I was under a lot of pressure to get a project done with lots of codependencies and lots hinging on it. During the early days of the challenge, I received fairly disconcerting feedback, so everything else went on hold. Anxiety took over.

A lot of people suffer with anxiety. Many refer to a small study that was done among the elderly and asked them what their biggest regret in life was. Many said that they worried too much. Well, of course! With the benefit of hindsight, that’s easy to declare.

A lot of people also say that anxiety isn’t going to help the outcome. Of course it will, otherwise we wouldn’t have evolved it. Naturally, there is pathological anxiety – and I am not talking about that, but in these days of overmedicalising feelings strong anxiety is seen as needing to be gotten rid of.

Well, I didn’t get rid of my anxiety or try to suppress it. Once I just admitted to myself that I was anxious, a weight came off my shoulders. This is that classic acceptance thing they talk about in mindfulness. Anxious. So what? It’s not a crime. It’s not a defect. It’s just my experience and right now, in this moment, it’s not actually that bad at all. Acceptance of reality gave me the opportunity to work on the underlying cause of the anxiety.

Right, closer to the point:

1. A day without assumptions

OMG. How do you live without assumptions? Occam’s Razor: the simplest answer is usually correct. When I got my worrying feedback, I immediately started mind-reading, mitigating the worst case scenario, assigning probabilities to possible outcomes and acting. Acting is such a drug against anxiety. The problem is of course that directionless hustle isn’t necessarily better than inaction. It’s exhausting and it is possible to do damage like a bull in a china shop.

Definitely a win. Interestingly, it was my olfaction that work up by doing this. I spent most of my life living in a city and that’s not the sort of place where you want to expose yourself to smells. Also, a walking meditation is kind of more lighthearted than the more perfectionist sitting meditation.

3. Get one thing that you have been putting off done

I’ve emailed a bunch of people about a project we all committed too, but all left it to stagnate. Two of the three recipients were very helpful in moving it forward and now, somehow, we have a fourth, who just contacted me out of the blue. Coincidence? Providence?

I was too nervous to do that with all my stress. What if I exposed something so disappointing or annoying that I would be too upset? I simply didn’t have the reserve to do it at this time. I will add it to my list (guess that’s a habit…)

W was easy. I know what I consider meaningful. I also know that this changes. I know why I am doing what I am doing though sometimes I wish the routes were straight lines. Ultimately, we have to adapt to our environment and respect the peninsulas of circumstance that we navigate around.

6. Wear the worst clothes you own

Haha, well that led to a clearout! (Anyone of eBay?) It wasn’t so bad at all. Where I live, in Dublin, clothes aren’t as much of a status symbol as they are in some places – like Russia, or I imagine China, or even the UK. I am very grateful for that.

7. Spend the day on your own, no social media

Fail. I can spend the day on my own, but social media – that’s tough. I have this sensation that I am about to get some kind of interesting news via social media. All it is in reality is a trained dopamine-mediated habit. I need to get out of it. It’s not that hard, but once again, it may expose things. For example, it can expose just how lonely I feel sometimes. And then, if I commit to not having social media, at least on certain days, then I am leaving myself to confront the loneliness. As a teenager, I used to travel a lot – and it would always be a connection flight. Sometimes, the connection would be 4 or 5 hours. This was before the kind of engaging social media we have now and certainly before widespread free wifi. I just remember that horrible mix of boredom and loneliness and I don’t ever want to feel it again. Having said that, I always say I come up with some of my best realisations in transit. Maybe then, I should just take the bandage of and be alone with myself, whatever may bubble up.

8. Write down the things that annoyed you

Fail once again. I was worried that it would put me in a foul mood. That’s quite presumptuous and possible wrong. It remains on the to-do list.

9. Go through the notification settings on your phone

I couldn’t really do that. I was worried that I don’t have the time with my project. It also felt a bit wrong to be messing around with new recipes when things are shaky. Once again, pretty presumptuous, but hey, all I can do is all I can do.

11. Note how much of the stuff you do isn’t for you

This turned out to be a surprise. Even from a Machiavellian points of view, I can easily argue that everything I do for others is done as an investment into a relationship.

12. Look back at where you came from and see where you are now

What a magical thing to do. I thought of my parents, of where I was born, of where I started, of the role I had to play in where I am here today. I think so many of us get upset as we feel that life happens to us and that we don’t have any real control. To any human being, it is very upsetting to not be in control. But is it true? On the one hand, in the grand scheme of things we are small and insignificant. But in the context of our own lives, we are a big deal. Just like the Stoics would argue it’s important to focus on what you do or think as a person. Circumstances aren’t always a form of feedback about how well or poorly we are doing. Looking back at how we navigated our circumstances, even back when we were younger and much more naive, is bound to generate some feelings of pride and invigorate the perception of who we are people.

13. Pay attention to the people in the shop queue

Well, let’s just say I was dragged shopping in IKEA during this time. There was a lady in front of us in the queue who changed her mind on what she was going to buy and was hiding the goods she was going to just dump at the cashier under a pile of bags. Before sneaking the stuff away, she looked over at us a bit like a poorly trained dog looks at people passing by when it’s eating. But I really couldn’t be bothered judging. Maybe she has too much sense to just buy 3 French presses (that don’t filter anything by the way)?

14. Check email only twice a day

Fail. What if something super important happens and I don’t even know?! I need to work on this.

15. Look back at the last 5 purchases you made and whether you needed them

They were all quite optional. I’ve learnt the lesson of not having useless clutter a long time ago (moving dorm rooms every year in college will teach that fairly quickly). However, I was quite surprised at how I could have gotten away without having a lot of these things.

16. Thank yourself for trying so hard

This is a lot like looking back at where you came started. Yes, sometimes the seas part, the light shines, the lucky break happens and we should be endlessly grateful for these blessings. However, we should thank ourselves for working so hard and having faith even when things don’t look good. 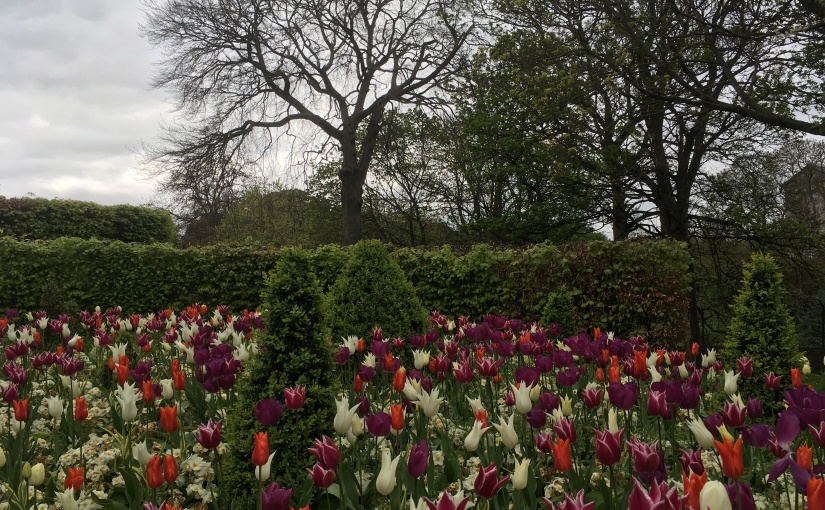 Happy May Day all.

Here are a few reasons to love May:

A list of reminders drawing on mindfulness, Stoic philosophy and just general common sense urging us to be more present.

I hope you enjoy it. Print it out and see how you get on. I will report on how I got on on 16th May.